FALL SPORTS IN FLORIDA POSTPONED UNTIL AUGUST 24TH
8 months ago 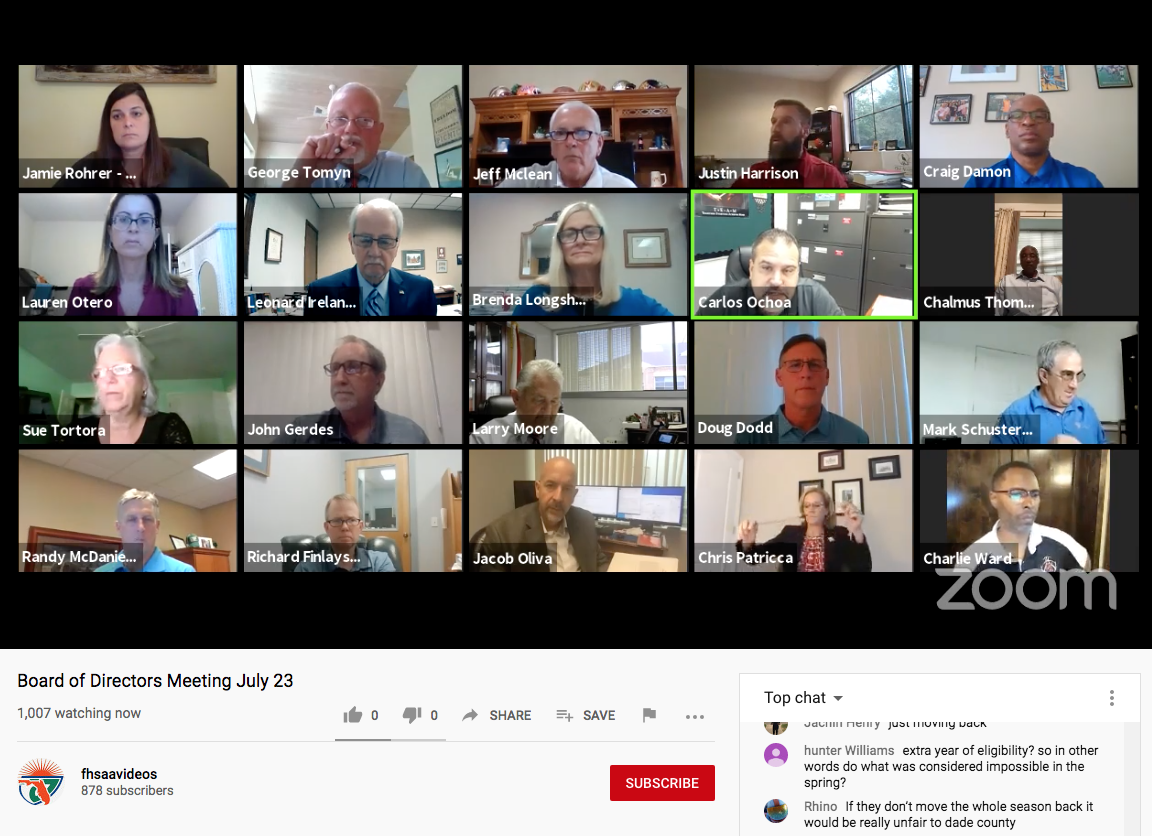 The Florida High School Athletic Association (FHSAA) passed a vote 11-4 to postpone ALL Fall Sports nearly a month until August 24th, 2020. The vote calls for FHSAA Executive Director George Tomyn to work with the Sports Medical Advisory Committee (SMAC), and the Board of Directors to reconvene for an IN PERSON Board of Directors meeting between August 10th and August 17th, at the latest. This will give the board at least one week from planned August 24th start to inform the state of the direction they will provide for the state moving forward during a pandemic.

The motion allows for teams to resume following summer policy in regards to summer conditioning.

The new Board vote may come as a shock to the few teams who were prepared to officially start this upcoming Monday, but comes to many teams around the state as a reprieve.

The FHSAA Board had just voted earlier this Monday 10-5 on a motion to continue as planned, with allowable fall practices to start on this upcoming Monday, July 27.

Now, in only a matter of days, the FHSAA has reversed course by voting in favor of a motion presented by Doug Dodd to POSTPONE ALL FALL SPORTS until {at least} August 24th.

Because Dodd was part of the contingent that originally voted 10-5 in favor of motion allowing the start of the fall season at July 27th, he was able to bring forth a new motion which would in fact reverse the Board of Directors original vote on Monday's emergency Board of Directors meeting.

Doug Dodd presents a motion that will TEMPORARILY POSTPONE all Fall Sports until Aug. 24th, allowing summer conditioning to continue.

This move was aimed at offering equitability in the state, and also as a move to allow the FHSAA to make a more uniform decision approach in terms of leading the direction and coordination of team play statewide.

FHSAA Board President Lauren Otero, Assistant Principal at Tampa Plant High School, had scoffed about the lack of leadership of the FHSAA, and reiterated the need to provide the leadership needed to steer sports during this troubling time adapting to combat a pandemic.

FHSAA board president Lauren Otero reveals that as of earlier today, 359 out of 396 public school surveys she received WILL NOT START on the recommended start date of this Monday, July 27th.

Bobby Johns, Athletic Director and Head Football Coach at Wewahitchka High School, argued that although the state takes a view for equitability statewide, it's not statewide in the sense that it doesn't represent each school equally. He argued that those along the I-10 corridor could have used this "window of opportunity" to play a full 10 games schedules with those teams that have not been impacted the COVID-19 virus. North Florida has not been impacted as much as the epicenter South Florida and other area and counties across the state. Johns originally presented the motion that passed 10-5 on Monday, which allowed the state to move forward with the pre-agreed date of July 27th for start of practice.

Meeting adjourned at 8:18pm EST, with a peak viewership of over 2,200 having viewed the broadcast LIVE via the FHSAA YouTube channel. The previous board meeting on Monday, July 20th lasted 4 hours and 56 minutes. Thursday's meeting was somewhat shortened due to the some late agenda items being impacted by today's decision to postpone All Fall Sports.

View the Thursday, July 23rd FHSAA Board Meeting in it's entirety below: