OpenWeatherMap exception: Your account is temporary blocked due to exceeding of requests limitation of your subscription type. Please choose the proper subscription http://openweathermap.org/price (Code 429). 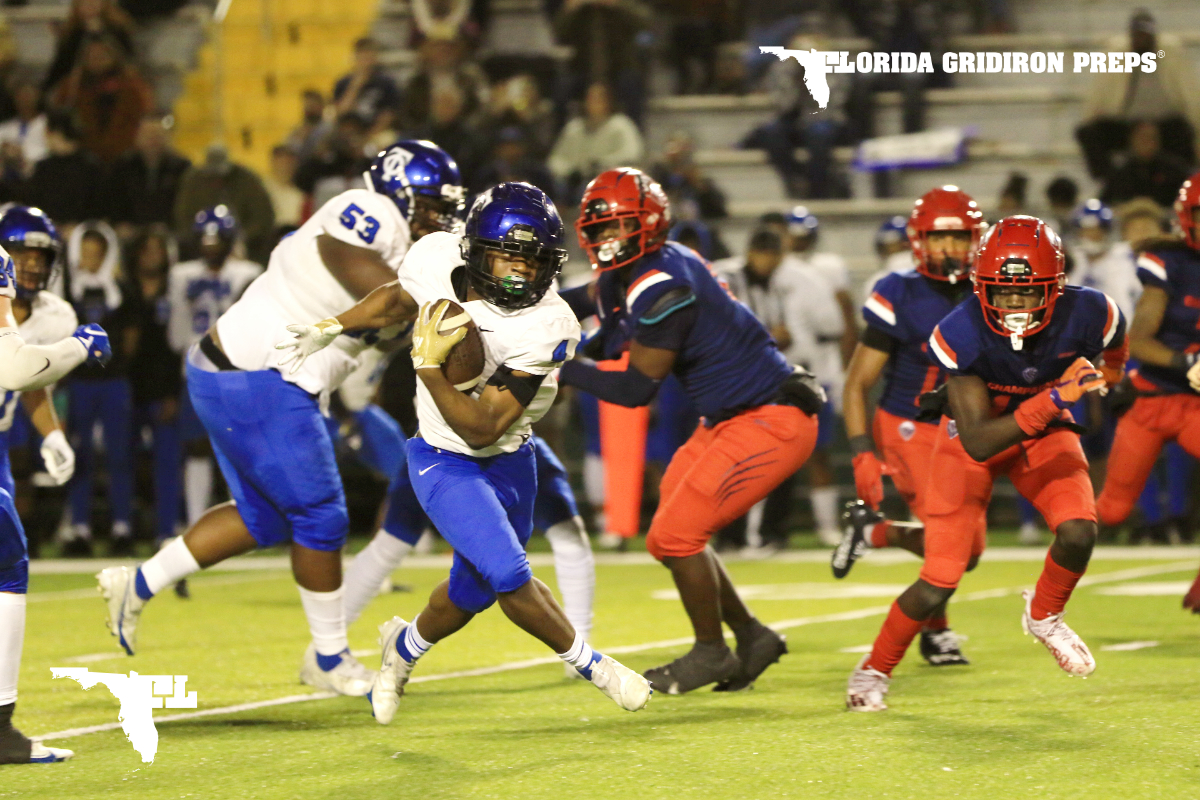 Jacksonville Trinity Christian came in as the reigning 2020 Class 3A State Champs. Due to lower enrollment, the FHSAA reclassified the Conquerors in 2021 to Class 2A, where Champagnat Catholic has been the perennial favorites being the defending 2020 Class 2A State Champs appearing in their sixth straight championship game. Thus, there could only be one back-to-back state champion... and the Conquerors stayed true to their name conquering the Class 2A State Championship. 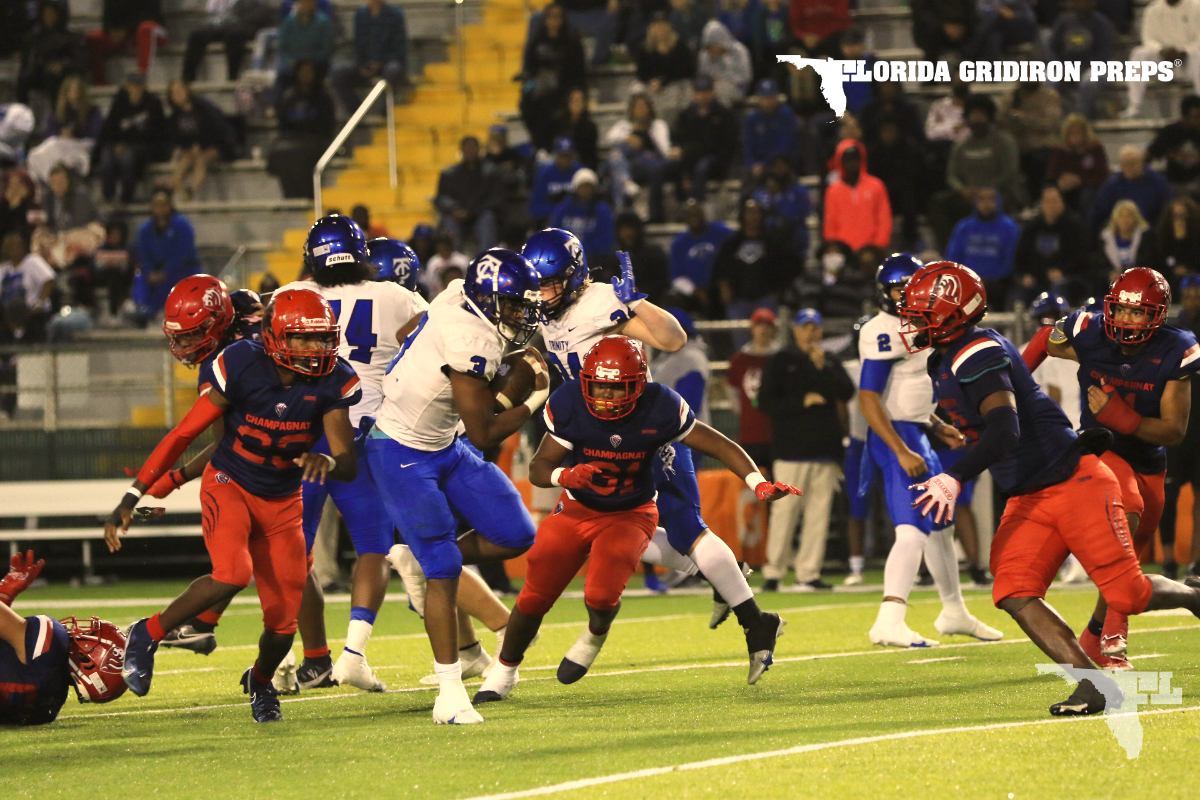 Junior Trinity Christian Running Back Treyaun Webb led all rushers with 173 yards on the ground and 2 Touchdowns. His 43-yard scamper in the 1st quarter put the Trinity Christian Conquerors on the scoreboard in response to an early score from Champagnat's Kelvin Blount's 40yard touchdown reception from freshman sensation QB Ennio Yapoor.

Tied 7-7, Jax Trinity Christian freshman sensation QB Colin Hurley hit WR/K Seth Bialek for a 14yd TD connection to put his Conquerors up 14-7 with 3:28 in the 1st quarter. After back and fro stunted offensive sessions in the 2nd quarter, the Conquerors went to halftime with a tight 14-7 lead.

Jax Trinity Christian had a nice 33 yard return by L.J. Kelly to open up the 3rd quarter giving them prime position at Champagnat's 42. A couple plays later, the other head of the Conquerors rushing attack Darnell Rogers would pick up steam taking the rock 22 yards to put them in the red zone. Treyuan Webb would expand the lead to 21-7 with a 12-yard run for his 2nd touchdown of the night.

To start the 4th quarter up 21-7, Trinity Christian started to work the workhouse Darnell Rogers with 6 rushes for 59 yards on the scoring drive alone with Rogers expanding Jax TCA's score to 27-7 with a 3yd Touchdown run with 9:57 in the 4th. Champagnat would respond less than minutes later with an 11yd TD run from Yapoor and a successful 2pt conversion to trim the score within reach to 27-15 with 7:44 left in the game. Champagnat had gained momentum, but could they stop Trinity Christian's vaunted rushing attack which would be sure to attempt to milk the clock as the 4th quarter winded down.

An energized Champagnat defense came out and stopped Trinity Christian with a 3 and out forcing the Conquerors to punt. With 5:02 left in the game, Champagnat needed two scores. Yapoor would connect with highly touted Champagnat receiver Benjamin Prosper for 14 yards and a 1st Down. But the next play, Trinity Christian's LB Johnathan Goodard forced a sack with Yappor intentionally grounding the ball resulting in a loss of 15 yards and a down. 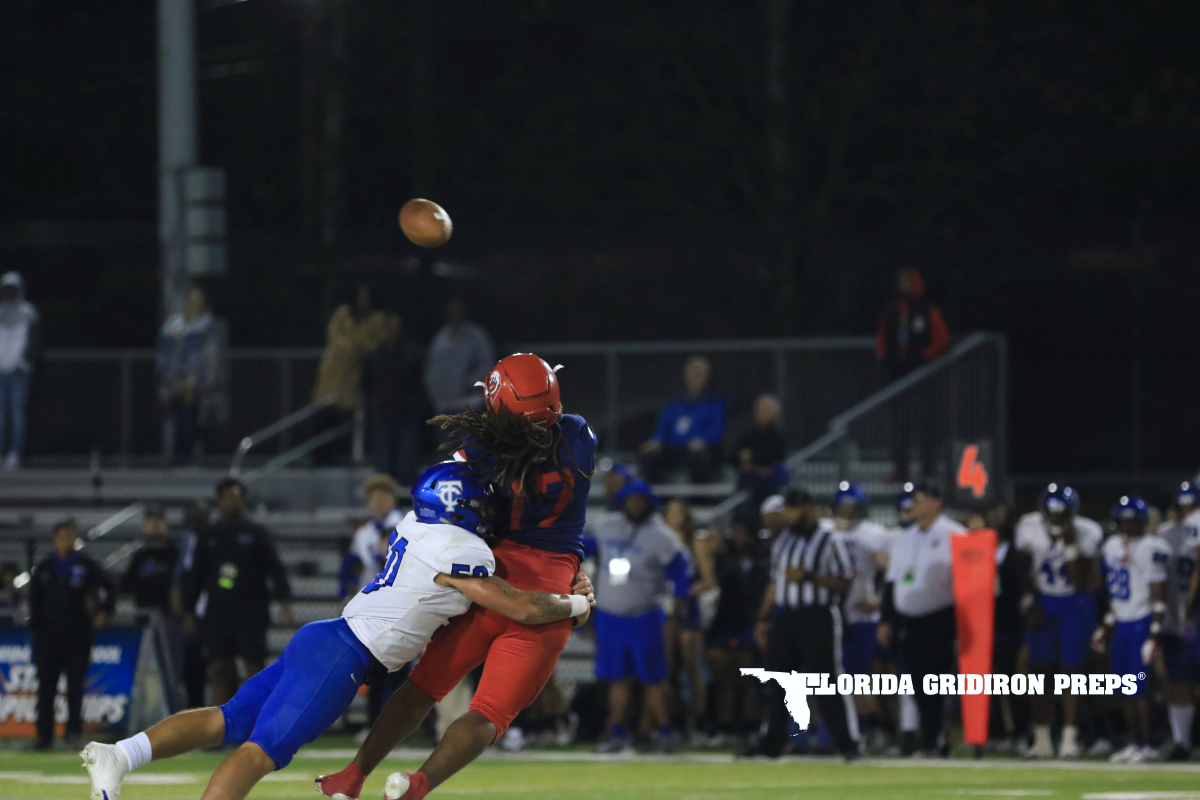 PHOTO:Senior Trinity Christian Linebacker Johnathan Goddard (#50) applies pressure to Champagnat Catholic freshman QB Ennio Yapoor -- [Photo Credit: B. Jackson, Florida Gridiron]
Two plays later, LB Caden Morrell would have a crucial pass break up forcing Champagnat to go for it on 4th and 18th. Morrell made his presence felt on the grandest of stages, ending a monster game with a team-high 9 tackles, 1.5 sacks, 3 Tackles for Loss, a Fumble Recovery and a PBU.

Down by 12 with 4th and 18 from their own 40, Champagnat was forced to go for it, connecting with Ben Prosper for 15 yards but not enough with a holding penalty a turnover on downs. Trinity Christian was now in firm control with the sights of their 9th State Championship in clear view. Treyaun Webb would break free for an explosive 38 yard gain, only to be horse-collar tackled at the one. (Editor's Note: Very Thankful Webb was fine as this was a nasty weight-bearing takedown that can really hurt players and hamper careers). Rogers would score from the 1 on the next play for his second touchdown and potential sealing the game with a 34-15 lead and a dreaded three-score advantage.

But Champagnat took only 5 plays and barely over a minute to respond with a string of 3 straight passes to different receivers culminating in a 51 yard TD toss from Yapoor to Marvin Sims to trim the score to 34-23 with 2:13 left in the game.


Trinity Christian would recover the onside kick. Webb would rush for 9 yards on his last attempt of the game, with Rogers breaking free the next play for 46 yards and the final touchdown of the game to seal the deal 41-23 after Seth Bialek's successful XP attempt. Sophomore Running Back Darnell Rogers put up 173 yards, with 87 yards and 3 Touchdowns in the 4th quarter alone in an offensive explosion for Trinity Christian.

With a young backfield spearheaded by freshman phenom Class of 2025 QB Colin Hurley, and sophomore Darnell Rogers, best believe that back-to-back State Champs Jacksonville Trinity Christian will be favorites to 3-peat in 2022.

VIDEOS OF THE 2021 CLASS 2A STATE CHAMPIONSHIP