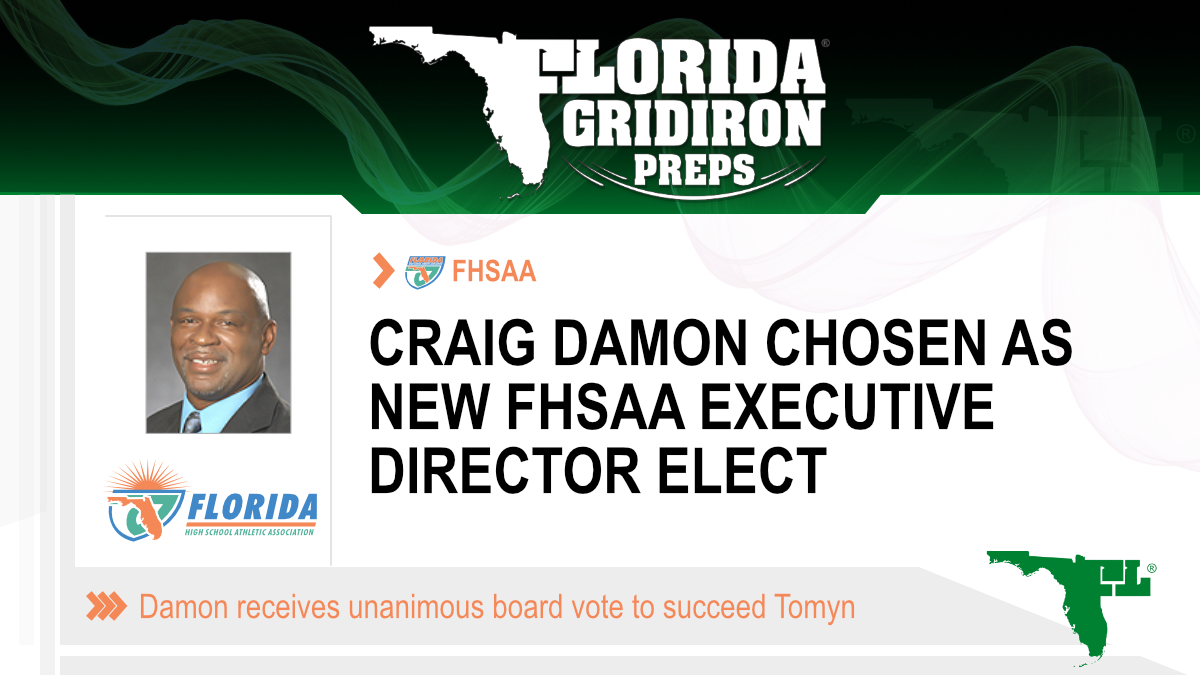 Damon was one of 5 finalists for the position of FHSAA Executive Director. Each of the finalists was interviewed during the FHSAA Board of Directors Special Meeting on Saturday, and the final vote was taken by the board later in the evening.

The FHSAA Board of Directors voted unanimously for Craig Damon to become the 11th FHSAA Executive Director in the organization's history and the FIRST African-American to helm Florida's prestigious governing body of interscholastic athletics.

Damon has a myriad of direct high school experience and has been with the FHSAA since 2013, most recently serving as the FHSAA's Associate Executive Director of Eligibility and Compliance.

Damon's expertise and experience with eligibility and compliance should lend well to the transitioning high school athletic landscape where compensatory legislation and implementation of possible NIL compensation for student-athletes is a looming subject approaching many states with solutions being looked to the state's official governing bodies for some form of structural guidance presenting balance.

Headquartered in Gainesville, The FHSAA is a non-profit 501c(3) corporation founded in 1920 and has been Florida's official governing nonprofit organization for interscholastic athletics since 1997 under Florida Statute 1006.20.

Per the FHSAA's official website: "The FHSAA sponsors over 3,500 championship series games through which 144 teams, and 294 individuals are crowned state champions in 32 sports each year. Over 2,000 student-athletes each year experience winning a championship. Through participation in these athletic programs, over 800,000 students annually are extended opportunities to receive lessons in leadership, sportsmanship and citizenship."

The Executive Director's duties entail but are not limited to being the Chief Executive Officer, supervision of FHSAA staff and office, interpretation of bylaws, guidelines, regulations, policies, and procedures, and corporate sponsorships. The Executive Director is there to provide guidance, but ultimately things become law by vote of the 16-person Board of Directors, which serves as the executive authority of the FHSAA. Board members are elected to serve a three-year term and may seek reappointment.

Damon's entry as the helm of the FHSAA comes at a time when the upcoming football landscape is on the budding of a new classification system with teams being classified as Metro and Suburban. Earlier this year, the FHSAA Board of Directors voted 9-7 to base classifications for the next two years on 10-year census data. This marks a shift to supposedly provide equity to avoid major metro teams from consistently claiming the majority of titles for a region. In 2019, South Florida comprised of teams from Miami-Dade, Broward, and Palm Beach Counties, claimed 7 of the 8 State Championship trophies.